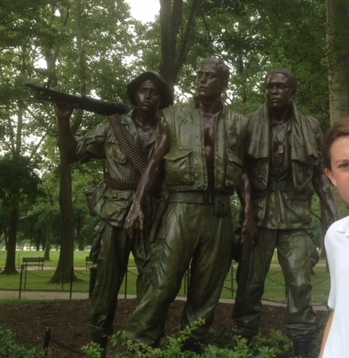 “Long live Eddie we have found Eddie and rounding up his family this is great.”

In 2015 Thomas wrote in his memoirs about the death of his friend and fellow platoon member, Eddie Lama. He continues to hear from members of the Lama family and others in his unit.

Thomas’ book, “Keeping it Lively: The Hunt for Eddie Lama,” was a project he’d always hoped to complete; but he had to wait for retirement to find the time.

This spring, two and a half years after he completed his memoir, his platoon leader from 50 years ago sought him out, saying that he had visited the grave of their fallen comrade in Mundelien, Ilinois, on Memorial Day. He now lives in Evansville, Indiana.

The platoon leader was seriously injured himself in the fighting in which Eddie died, and he later wrote:  “I really took his death hard.  He was my RTO [radio telephone operator] when he got shot while my Medivac [rescue helicopter] was lifting off.”

In another development early in the summer of 2018, the youngest cousin of Eddie Lama, who lives in Maine, also wrote to Thomas: “I was born a few months after Eddie’s death . . . .  I’ve always hoped that my birth gave new hope to our extended family during their grief.” He added that he knew “so little about Eddie except his a bit about his death but mostly about his sense of humor.” So, he wanted to read “Keeping it Lively” to learn about his cousin’s service and sacrifice.

Patrick Marschal has also been telling his young son about the Vietnam War and those, like Eddie, who fought it. They recently visited the memorials in our nation’s capital.

This is that boy pointing to Eddie’s name on the Vietnam Memorial. 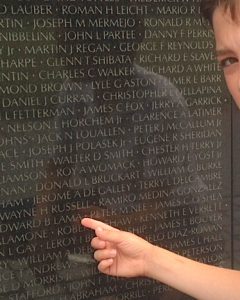 Thomas and Eddie’s platoon leader has explained: “I have had very little contact with men who served in our unit, but do have contact with a couple . . . [one] in Massillon, OH and . . . [another] in Thibodaux, LA.” He recently learned that “Another man from our platoon died last month in Princeton, IN . . .  (we called him Lifer).”

The platoon leader has purchased a copy of the Newsweek issue of April 28, 1969 that includes a brief story about Ed Lama, “A Quiet Week in Vietnam.” He writes: “I grieve often that he was not able to live past age 21.  He would have been a very valuable member of society.”

He also asserts: “I considered Ed Lama to be the best soldier, and my best friend, in the platoon.  He was my RTO (radio telephone operator) for quite a while and we shared many a foxhole.  He was killed providing cover fire for the Medivac helicopter that was taking me out.