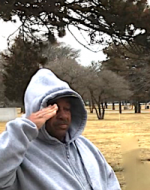 CONNECTINGVETS.COM’S Matt Saintsing chronicles Thomas Bragg’s 850 mile journey from Blackstone, Virginia, to Mundelein, Illinois, and the grave of his friend Eddie Lama, who died on March 31, 1969, in Vietnam.

A search, a book, and a promise kept 50 years later

Thomas Bragg fulfilled a promise decades after he made it when he visited the grave of his friend on Sunday—50 years to the day after he was killed.

At 71-years-old, Bragg drove more than 13 hours from his home in Blackstone, Virginia to Mundelein, Illinois—about 40 miles north of Chicago—to pay his respects to Eddie Lama along with three other relatives and friends.

Lama and Bragg served in the same platoon in Vietnam with the Army’s 1st Cavalry Division, and Bragg says the two instantly hit it off.

“But they did,” says Hodge.

Bragg and Hodge reunited a half-century after they both left Vietnam to pay their respects to Lama. The two were connected by chance a few years after Bragg began a search for Lama’s family.

Bragg had kept a trove of photos in a cigar box for decades, bringing them out from time to time to remember their friendship. The two had agreed to visit each other after the war, but on March 31, 1969, Lama was killed.

In 2015, Bragg found Michael Lund, professor emeritus at Longwood University, who led a writing program for veterans called Home and Abroad. After learning of Lama and the photos, Lund helped Bragg to find Lama’s living family to deliver the images.

The two also published a 28-page booklet on their friendship.

Lund then contacted Hodge and a half-century to the day after Lama died, Bragg kept his promise by visiting his buddy Eddie.

Hodge was in the battle and remembers vividly Lama’s bravery that he says saved the lives of Americans, including his own.

“He got killed the day I got injured,” says Hodge. “In fact, he was covering for my helicopter when he got killed.”

An American helicopter was near the platoon, but so were enemy snipers.

Attempting to suppress the snipers, Hodge lobbed a grenade to where he thought they were.

Realizing he missed, Hodge stood and asked for another grenade when a bullet was sent flying into his back, exiting through his arm, ripping blood vessels to shreds along the way.

Hodge nearly died bleeding out, but he lived. He would later need a vein transplanted from his leg to his arm to save it from amputation.

Hodge was evacuated off the battlefield, and wouldn’t find out what happened to Lama for another two days.

Lama attempted to shoot the enemy with an M72 light anti-armor weapon (LAW) when a bullet struck his head killing him instantly.

“It just about killed me, when they told me what happened,” says Hodge. “Eddie was just a good guy and a good friend, and you hate to have a good man gone like that.” Hodge was hospitalized for six months after that and had no contact with his soldiers.

“When I left Vietnam I had zero addresses and zero phone numbers of people to contact back in the states,” he says. “Zero.”

Lund got a hold of Hodge and told him about Bragg’s search for Lama’s family. Hodge then invited Bragg to visit Lama’s grave.

They made the trip on Sunday. 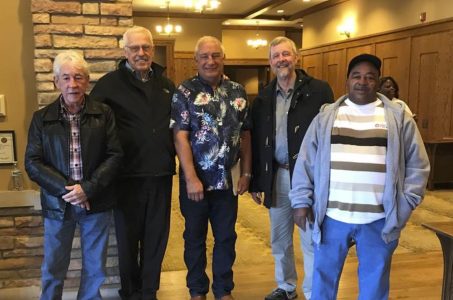 Hodge compares the weight of the visit to the final scene of Saving Private Ryan, where an old man is visiting a friend who never had the chance to grow up. “Because Eddie’s in the ground and I’m not…I sure hope I didn’t waste the last 50 years,” he says. “He was a fine young man and a good soldier.”

“I wanted to kneel at the grave and shed a little tear, but I held it back,” says Bragg as he remembered their time together in Vietnam.

But for him, the visit was just about keeping the promise.