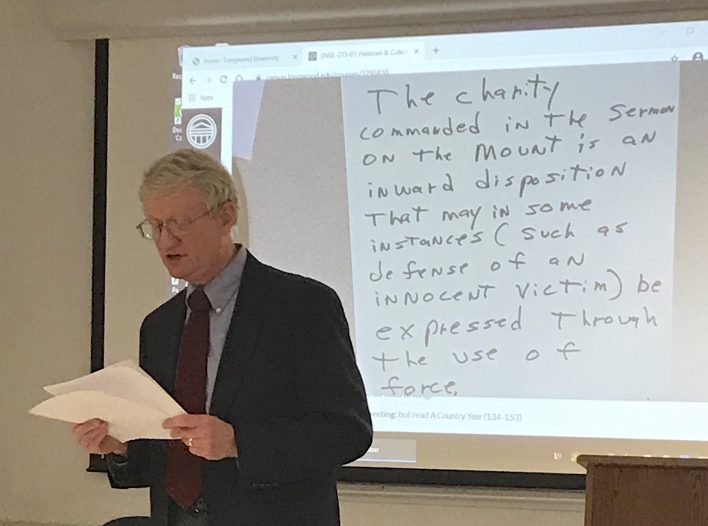 Dr. John S. (Jerry) Mebane, Professor Emeritus of English, University of Alabama at Huntsville, speaks to English 215-01  on March 9. The focus of the course is “The Death of the Citizen Soldier?” And Dr. Mebane’s topic was” Christianity, pacifism, and the principles of justice in warfare,” a topic at least as old as Saint Augustine who wrote in the early 5th century CE; but it has roots in Chinese, Indian, and other cultures. Students and guests (faculty and administration)  were in attendance. 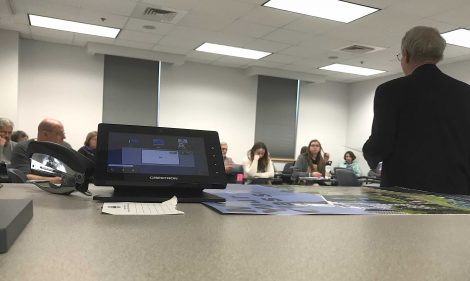 A Vietnam War Veteran, Dr. Mebane holds degrees in English from Presbyterian College (BA 1968) and Emory University (MA 1973, Ph.D. 1974). At UAH he served as Interim Dean of the College of Liberal Arts and Director of the Honors Program. In addition to numerous articles and conference papers, he is the author of Renaissance Magic and The Return of the Golden Age: The Occult Tradition of Marlowe. Jonson, and Shakespeare (London: Univ. of Nebrasko Press, 1989) and Cymbeline. The Winter’s Tole, and The Tempest: An Annotated Bibliography of Shakespeare Studies, 1864-2000 (Pegasus Shakespeare Bibliographies. no. 7. Fairview, N.C. Pegasus Press. 2002).